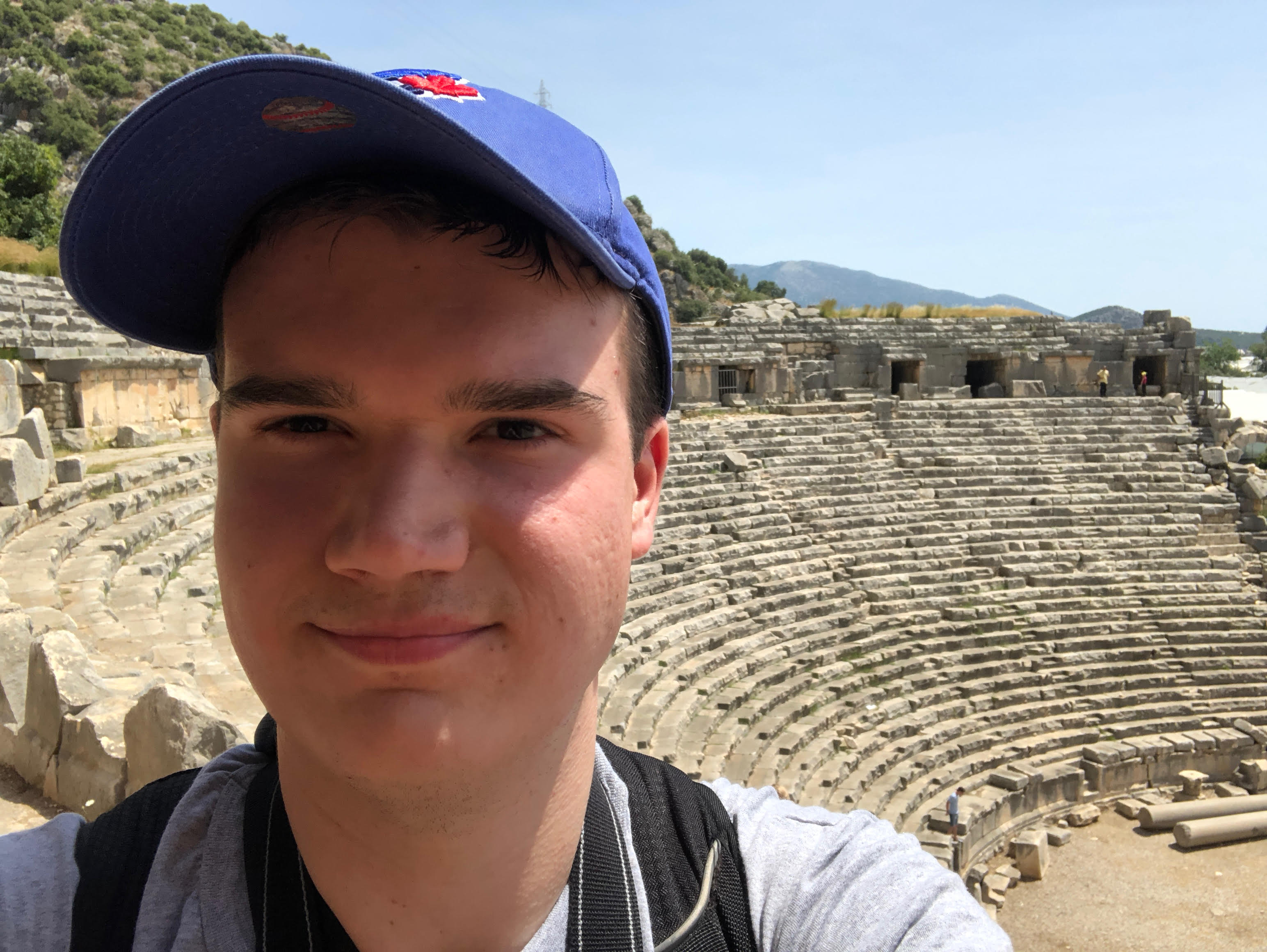 As a growing Canadian company Surex wants to encourage students following their dreams to pursue their education. As a result, we launched our scholarship program to give back to the community and had our second annual scholarship run this year!  Today we are announcing the winner of our 2nd Annual Surex Scholarship, on the topic of AI. We’d like to announce that the winner of our 2020 scholarship is Mr. Alexander Tchoukanov from the Ontario Tech University!  He is studying pathophysiology, neurophysiology, microbiology and anatomy and physiology relate to health and disease and plans on attending  the University of Ottawa Medical School as his next step. Way to go! Thanks to his impressive essay titled “The Prospect That Artificial Intelligence will benefit mankind.”, Alexander has won and will be awarded $1000.00!

We’d like to thank all who applied for our scholarship as we appreciate the time you took to write your essays and submit your ideas. As this is an annual scholarship, we encourage you to please apply again next year.

For more details about our scholarship page, please visit www.surex.com/scholarship

The full essay, “The Prospect That Artificial Intelligence will benefit mankind.”, by Alexander Tchoukanov is below:

There are many opinions on the matter of AI (Artificial Intelligence). Some believe it has an unbelievable potential to save/aid humanity, while others believe it should be watched with a careful eye as it’s ever increasing expansion may expedite our downfall and lead us to down a path terminating in our peril. Bill Joy published an article Why the Future Doesn’t Need Us from April 2000 promoting the idea of relinquishment when it comes to AI. This essay will critique his stance on AI, and will provide a basis for me to espouse the anti-luddite perspective on the matter while highlighting the potential AI has for the betterment of humanity. To start off, I disagree with Bill Joy's statement about giving up on technology, because modern technologies like robotics, nano-technology, robotics, confer benefits that greatly outweigh the potential consequences. Technology is constantly growing, and even though they are well founded, Bill Joy's ideas don't seem to consider the potential ramifications if relinquishment were pursued. I agree more with Ray Kurzweil's view that it shouldn't be relinquished even though technology can bring about both negative and positive effects. The nefarious uses and consequences of technology can be addressed and precluded by knowledge acquired through the process of its development. Ultimately without technology, progress of humanity, which I define as the betterment of the human condition, and financial gains through proper business would not be possible.

One of the points that Bill Joy makes is that power will be seized from humans to robots, because the more we use them, the more machine dependent we become. According to him, we will with no difficulty turn to them to solve our problems, without questioning them because we will rely on their decision-making abilities which could supersede human acumen. Even though I agree with him that societal problems will get more complex, and we may turn to AI to solve these issues, I don't think that we will be forced to accept all of their decisions, nor do I think that humans will lose the ability to make decisions. He also believes that relinquishment should be practiced to prevent humans from submitting their minds and wills to that of the more intelligent robots. The premise of his argument affords artificial intelligence full autonomy and suggests that they will become a parahuman threat beyond our control, as AI will somehow "replace" the human mind. AI will never have autonomy because they will never replace humans, as we use technology as an extension of what we can't do: we use it to solve problems in specific domains that we don't excel in. For example, using Google to process large amounts of data, something that humans cannot do with the same efficiency. We use AI to do things for us. As such, AI is designed to work in specific domains that we appoint them to work in. There are domains, like emotional understanding, that AI cannot work in, therefore it is not possible to have a multi domain "general purpose " robot. I don't believe that AI will grow their intelligence towards a stage where they don't respond to human commands because essentially, they are machines that enact the software code that humans put in them. AI will never be fully autonomous because they will never replace humans in all domains of thinking, such as emotional understanding, morality, ethics, etc. If they do attempt to go beyond what they are designed to do (which would mean they have free will, which they don't), kill switches could be implemented in their algorithms allowing humans to prevent loss of control. Ultimately, I believe that humans will be in control of AI, not the other way around. For these reasons, I don't believe robots will become autonomous in a such a way that we can't challenge their decision-making capabilities, like Bill Joy suggests.

Bill Joy mentions that he has seen Murphy's Law in the development of technology, which states that anything which can go wrong will go wrong and brings up the example of DDT and antibiotic resistance, which I interpret as an attempt to make the reader concede to the idea that technology can evolve in ways we cannot control. Antibiotics were designed to fight infections, which they did, however this technology itself didn't cause antibiotic resistance, it was the human error of overusing it that caused the problem. We have learned from our mistakes that human actions and not the technology that we developed is where the problem lies. Modern physicians know of the perils of over prescribing broad-spectrum antibiotics, and are now very selective in their treatment of patients, using more narrow-spectrum agents. Technology did not take us over in this case as we have learned from the overuse of antibiotics and DDT that we should pay more attention to what happens if we overuse and abuse our new technologies. The research surrounding it definitely takes this under account. Technology hasn't and will never take away our ability to reason or have rational thought. We can learn from our mistakes, allowing us to control the development of technology, preventing the reoccurrence of errors. Technology, like Ray Kurzweil says is something that can bring about good and bad effects on wellbeing of humans. I believe that by using the knowledge acquired through the development of new technologies, scientists can mitigate its repercussions. Biotechnology can be used for good and for evil: its advances can be used for bio-terrorism, however it is overshadowed by the potential to better the lives of millions, by, for example allowing for inoculations against many deadly pathogens allowing us to prolong our lives. I know that if we were to relinquish computer technologies such as those near the 21st century that made the Human Genome Project possible, we would miss out on the ability to understand how diseases transmitted across generations affect our health. If we didn't pursue the development of certain pesticides that make plants more weather resistant, which have the potential to be harmful for the ecosystem, we would not have a fighting chance against famine in developing countries. I agree with Ray Kurzweil’s idea. Even though it can be used for good and bad, technology is ultimately the tool to better the lives of many people. Undergoing relinquishment could be very unethical, eliminating medical research for victims of cancer just because it can be used by terrorists, is not moral. I also agree with him when he says that by giving up technologies that are dangerous, we are potentially putting them in the hands of less moral individuals who may use them to cause harm. He addresses the concern that machines may self-replicate by mentioning that companies that make nano- technologies are aware of the threat of self-replication, and have safe guards in place. In the medical setting I have some experience with this. I know by working as a Research Assistant at Sick Kids Hospital in Toronto that children in the future will rely on nano-technologies to treat conditions like cancer, and if this technology was relinquished it could worsen their condition and jeopardize their life. Therefore, the pursuit of relinquishment when it comes to new technologies, such as the emergence of AI in all spheres of human life, business to medicine, would cost us gravely.

Partially adapted from: Tchoukanov, A. Final Assignment Essay. (2018). SSCI1470-Impact of Science and Technology, week 6. Comment About Technology and the Future Retrieved from: https://uoit.blackboard.com/webapps/portal/execute/tabs/tabAction?tab_tab_group_id=_1_1